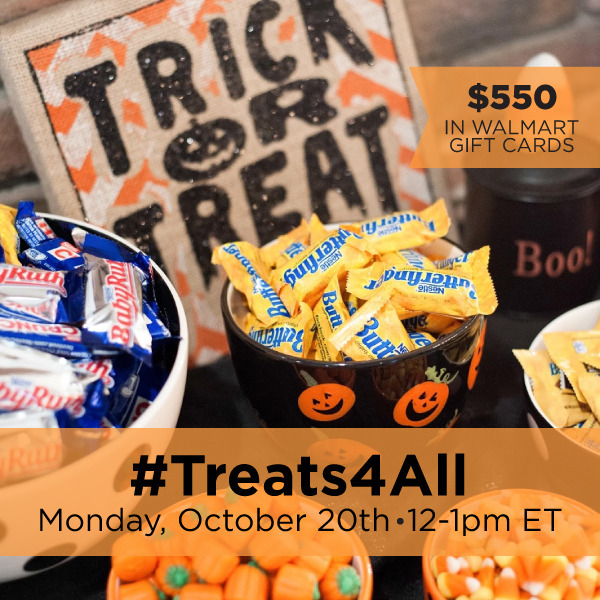 Do you love a good Twitter Party? You know we do and we’re excited to host a party about celebrating the fall season and Halloween! On Monday, October 20th at NOON, please join us for the #Treats4All Twitter Party where we’ll be discussing ways to make your Halloween celebrations fun and easy with the help of favorite Nestle products from Walmart and giving you a chance to win prizes!

Our family has a number of Halloween traditions, from decorating to what we eat for dinner before trick-or-treating. This year, Halloween is on a Friday which is great because we don’t have to worry about getting up early for work or school the next day! After Tombstone Pizza for dinner, I’ll walk my daughter around to the neighbors for trick or treating and hand out assorted Nestle fun size candy to our trick or treaters. I may or may not be dipping into the candy bowl for a few Butterfingers! I always buy extra candy to snack on myself!

Join me and RSVP for the #Treats4All Twitter Party on SoFabChats!

TIP: Special deals and brand coupons? Keep that option checked when you RSVP for the party!