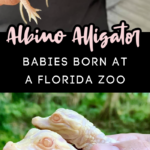 I saw an albino alligator once at the Dallas Zoo in Texas. It was hella cool!

These pigment-less gators are so rare that you are lucky if you set your eyes on even one during your lifetime.

People in Kenansville, Florida are lucky times two (five, actually, but I’ll get to that in a minute)!!

The Wild Florida zoo (which is just 45 minutes from Disney, btw) just hatched TWIN albino alligators, and they are so stinking cute!

We’re really excited, we have these guys in the back right now, we’re taking really good care of them, making sure they’re doing really good, and then before long we’ll have them out on exhibit too.

Andrew Biddle, an alligator trainer at Wild Florida who is known as the “Gator Whisperer”

Albinism is a gene anomaly that is a recessive gene trait. It has to be passed down from BOTH parents.

The way these little guys got their White-Walker-esque color is because their mommy (Snowflake) and their daddy (Blizzard) are both full-blown albino alligators.

There’s a ton more that goes into the science behind passing on this gene trait, but I almost failed genetics in school. The important thing to know is that BOTH parents are albinos. LOL!!

They passed on their pinkishly white skin and pale eyes to their two little babies.

They are the most adorable little guys EVER!!

These parents produced five siblings to these new little guys last year, and only ONE of those siblings had the albinism trait (which the zoo still has).

The newest twins are in the “back,” getting cared for and nurtured. But, they will be available for zoo guests to see in the upcoming weeks.

We’re so proud of our albino alligator parents, Snowflake and Blizzard, and our Croc Squad team for helping these hatchlings.

Now, if these little dudes were out in nature, they would have trouble thriving. Their skin lacks all pigment (color), so they could not camouflage themselves, the way that gators due. They would also be more susceptible to health problems.

But, thank goodness, these guys were born in captivity, and can be loved and cared for in the best way possible so they can thrive.

By the way, these twins were part of a clutch of 18 eggs, and are the only two thus far to hatch — so it’s possible there are more albino babies in there!

If you are in Florida, head on over to Wild Florida and get some pictures!! I want to see more of these little guys.