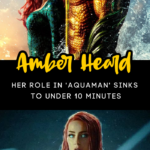 ICYMI there was a petition going around to get Amber Heard canceled from Aquaman 2.

This petition wasn’t just a fun little afterthought that a few people jumped on because they are #teamjohnnydepp.

Get this — nearly 3.7 MILLION people have signed the petition.

Let me put that into a little perspective for you. That’s like getting the ENTIRE populations of Dallas, Ft Worth, AND Austin Texas to get together and sign a petition.

She was all set to reprise her role for the upcoming Aquaman movie, but people want her OUT.

Do the right thing. Remove Amber Heard from Aquaman 2.

It seems that Warner Bros. is splitting the difference. They aren’t completely cutting Amber from the sequel, but they have cut her screen time down to less than 10 minutes.

TMZ first reported this information that according to film journalist Grace Randolph, her time has been cut.

The studio originally said that they weren’t going to bow to the pressure of fans.

I don’t think that we’re ever going to react to, honestly, pure fan pressure. You gotta do what you feel is best for the movie. We felt that if it’s [director] James Wan and Jason Momoa, it should be Amber Heard. That’s really what it was.

Now, I must say, this doesn’t quite seem fair.

Warner Bros. previously replaced Johnny Depp as Gellert Grindelwald in Fantastic Beasts. This was after Amber’s allegations in her op-ed piece in 2018 that Johnny was abusive during their 2 year marriage.

He was also fired by Disney from portraying Captain Jack Sparrow in subsequent Pirates of the Caribbean films. This is a role which he basically created back in 2003, and has embodied through 5 films since.

We got nearly 20 years of Depp playing Jack Sparrow. He completely made the Pirates of the Caribbean franchise what it is, IMHO. But, based on the allegations of one unstable narcissistic woman, he was dumped.

It seems only fitting that the same happens to Amber Heard. We don’t want to see her acting as Mera in Aquaman 2!

ESPECIALLY after the Johnny Depp versus Amber Heard circus-show-of-a-trial that is going down as we speak.

What do you think? Will you be seeing Aquaman, even though Amber remains in the film?