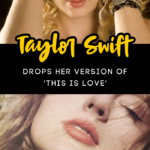 Taylor Swift’s version of ‘This Is Love’ is here, and ya’ll, it’s so amazing.

I wouldn’t consider myself a “Swiftie,” but listening to this song makes me come pretty close to jumping on the bandwagon.

The Taylor Version of ‘This Is Love’ is like a more mature cousin of the OG song, which was released on her 1989 album.

‘This Is Love: Taylor’s Version’ sounds very similar to the OG, but there is a very ethereal feel. The original sounded pretty ethereal too, but this is just next level. Plain and simple: it’s just mixed better.

I can’t really explain it. You are just going to have to go give it a listen.

Now, we ALL know that Taylor writes her songs about her personal relationships. It has been said to “Write What You Know,” and that is exactly what she does with her songs.

Each of her songs is like a look into her personal journal or diary. That has to be really difficult. I can’t imagine being completely vulnerable under the microscope of the public eye like that.

Taylor doesn’t spill any tea on the exact relationship that this song alludes to.

But, given the timing, many fans speculate that it is about her four-month relationship with Harry Styles.

“This Love” could easily be about the period of time in late 2012 when Taylor and Harry weren’t touring and briefly reconciled.

Side Note: I can only imagine that their babies would be hella good looking!

The themes and hidden liner notes for “1989” were all complete sentences for the first time, and all revolved more or less around one romantic relationship rather than more than one.

Taylor is known for dropping little subtle hints into everything she does — from songs, to interviews, to liner notes. If you guess the clues correctly, you can pretty much figure out who she is writing about.

It is VERY possible that the whole 1989 album was a nod to her relationship with Harry Styles. But, nobody — except Taylor — knows the real truth.

What do you think of Taylor’s Version of the song? Do you think it’s about Harry Styles? Let us know in the comments.

You can see the video for Taylor’s Version of ‘This Is Love’ HERE.