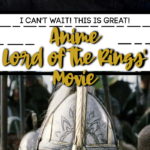 The creators of Netflix’s ‘The Dark Crystal: Age of Resistance’, Jeffrey Addiss and Will Matthews are writing the new film.

It’s called ‘The Lord of the Rings: The War of the Rohirrim’ and is being directed by Kenji Kamiyama who did the ‘Ghost in the Shell: Stand Alone Complex’ television series.

Animation has already started with Sola Entertainment and they are doing voice-casting now!

Plans for movies have been kind of off the rails lately, but as of right now this movie is planned for a theatrical release.

All of us at New Line feel a deep affinity for the extraordinary world J.R.R. Tolkien created, so the opportunity to dive back into Middle-earth with the team at Warner Bros. Animation is a dream come true. Fans know Helm’s Deep as the stage for one of the greatest battles ever put to film and, with many of the same creative visionaries involved and the brilliant Kenji Kamiyama at the helm, we couldn’t be more excited to deliver a fresh vision of its history that will invite global audiences to experience the rich, complex saga of Middle-earth in a thrilling new way.

‘The Lord of the Rings: The War of the Rohirrim’ does tie into the original trilogy movies.

It will focus on the story behind Helm’s Deep, which was the fortress where the battle took place.

This will serve as sort of a prequel to the trilogy, and takes place hundreds of years before the war.

it appears that the new anime movie will focus on Helm Hammerhand, the King of Rohan, I’m so excited!!