Aunt Jemima Officially Has A New Name and Logo 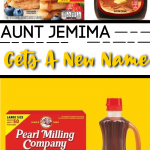 Quaker Oats announced Tuesday that its Aunt Jemima brand including their pancake mix and syrup officially has a new name.

The pancake mix and syrup are getting a new name but keeping the same color scheme so when you’re at the grocery store, you can still keep your eyes peeled for the bright red pancake box.

However, you may still be able to find Aunt Jemima products in grocery stores this summer until the packaging officially changes over.

Quaker Oats had originally announced the name change last summer “based on a racial stereotype.”

The new design now features the same fluffy pancakes and gooey syrup but with a different name and a entirely new logo on the front of the bottle.

According to Quaker Oats, the new name originates from 1888 in St. Joseph, Missouri and was the originator of self-rising pancake mix.

On top of the new name, Quaker will also be donating $1 million to groups that empower black women and girls!

6.3K shares
Justin Timberlake Owes Britney Spears An Apology and While He's At It, He Owes The Fans One Too
← Previous
This Starbucks Golden Girls Cheesecake Frappuccino Is Meant To Be Shared With A Friend
Next →
Click here to cancel reply.