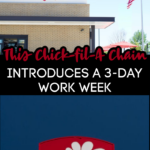 Forget five day and even four day work weeks because this Chick-fil-A store has opted for less than that.

Justin Lindsey, a local operator of a Chick-fil-A chain in Kendall, Florida has introduced a new work week at the restaurant that includes a 3-day work week with 14-hour shifts.

Combatting work burnout, increasing staff retention, and consistency in worker’s schedules is what Lindsey had in mind when coming up with thew program according to reports.

“My idea was to provide staff with this gift of time by creating a scheduling system where they would know exactly what days they worked for as long as they work here,” Lindsey explained to Insider.

Lindsey noted that since the idea of a condensed work week and a more consistent schedule, the new hours have allowed Chick-fil-A employees to plan their lives outside of work in advance.

The revised schedule which began in February has resulted in 100% employee retention at the management level including a flood of new applicants too, according to QSR Magazine.

The chain since has received more than 420 applicants for one single position that opened this fall!

And most recently, 25 Chick-fil-A workers and 18 team leaders decided to opt into the newly revised work week, according to Insider.