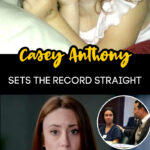 There is about to be a documentary interview released with Casey Anthony — one where she is supposedly going to set the record straight.

For only the second time ever, Casey will be breaking her silence and telling her side of the story.

Casey Anthony became infamous in 2008 when the world learned of the disappearance of her 3-year-old daughter, Caylee.

There were hundreds of leads that were followed up on. Each one of them a dead end in the case.

Then came the news that rocked the world.

Caylee’s remains were found in a wooded area near the family home.

Everyone was stunned when Casey was charged with the murder of the toddler.

But, the world quickly turned on Casey when the details came to light in this bizarre, horrific case.

A media circus-like trial followed, and everyone thought the case was pretty much a slam dunk.

Shockingly, on July 5, 2011, Casey Anthony was acquitted of the murder and manslaughter charges.

She was only convicted on 4 counts of lying to police, a decision that earned her a slap on the wrist and a bit of jail time.

Casey Anthony: Where The Truth Lies will debut on Peacock

Casey Anthony: Where The Truth Lies is a 3-part series, and it will debut exclusively on the Peacock streaming network.

According to People, Casey was given absolutely no creative control over the project.

There weren’t any guidelines as to what questions could be asked during the interview, so be prepared for the tough questions to be thrown at Casey.

Good Gosh, I can’t wait to see what she has to say!

Get ready for Casey Anthony: Where The Truth Lies to drop on November 29th, only on Peacock.