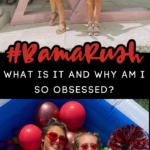 If you are not obsessively watching #BamaRush on TikTok, what exactly are you doing with your life?

A couple days ago, I was laying in bed scrolling through TikTok before bedtime, as I do.

I happened upon a #BamaRush video, and everything went sideways. The next thing I know, I turned my blurry red eyes to look at the clock, and it was 3am!

I had just lost about 4 hours to the University of Alabama Greek rush (don’t judge).

Now, people have been talking about #BamaRush on TikTok, and I’ve heard good things, but I had yet to dive into the BAMA sorority scene.

If you have no idea what I’m talking about, let me just school you.

What the heck is rush?

Rush is not EXCLUSIVE to the University of Alabama, but they definitely take it to another level.

It is the process that freshmen go through, jumping through a bunch of hoops (for lack of a better word), to try and earn a coveted spot at one of the Greek sororities on campus.

The guys also have a rush to join their fraternities, but it is nothing like the frenzy that is the sorority rush.

#BamaRush on TikTok is all about the sororities, so let’s stick with that for now.

What happens during rush?

At the University of Alabama, this tightly choreographed series of events commences about a week before school begins: Freshmen women move into their dorms early in the hopes of securing a “bid” from one of the university’s 17 participating sorority chapters.

It is first important to know that every sorority has their own traditions (they even have sorority “secrets” that “sisters” aren’t allowed to divulge), histories, and philanthropic causes, and the members of each sorority are VERY dedicated to each.

So there are FOUR different phases to Rush Week. The potential new members (PNMs) must participate in every part of the process in order to “bid” for a sorority.

What are the 4 different phases of “Rush Week?”

First there is an open house. During this time, the freshmen go around to the different sororities, and sort of check them out.

They get to know the “sisters” and see what the sororities are like.

Then, there is Philanthropy Day. This is a time when PNMs find out about each sorority chapters’ volunteer work — the cause that is near and dear to the hearts of all the members.

Next, the PNMs go through the Sisterhood round. At this time, the PNMs are paired with different sorority members — a sort of intimate get-to-know-you time. This is closely monitored by the powers that be in the house.

The last step is Preference Night, where the PNMs choose their TWO favorite sorority houses, and go visit them.

Then there is Bid Day.

This is the last Sunday of “Rush Week,” and it is when the PNMs eagerly await to find out if they get “bids” from their favorite sorority.

If you get a “bid,” you are invited to become a sister of that sorority. If you don’t get a “bid” — well, your college experience is going to be just a bit different than you hoped. No sorority for you.

Does anyone else feel hella bad for the 8% of girls that didn’t get a bid? *Sad Face Emoji*

Why do the PNMs care so much about what they are wearing?

In SO MANY of these #BamaRush TikTok videos, the PNMs are detailing exactly what they are wearing.

I mean, if I could live in sweatpants and a t-shirt, I would. But, not these girls! Oh, nay-nay!!

Each rush event has a different dress code, and it is VERY important that the PNMs have planned out what they will wear to each event.

Now, sororities are VERY hush-hush about exactly what happens at each event, the PNMs are NOT allowed to share their experiences, but they can totally talk about what outfits they are wearing.

And, talk about their outfits, they will!! These OOTD (Outfit Of The Day) videos have racked up MILLIONS of views on TikTok.

These videos may sound mundane and boring. But, Lordy Bee (a southern expression), these girls throw on their most southern accents, their cutest clothes, and their most poppin’ personalities. It’s simply addicting.

Why in the world are so many people following #BamaRush?

I’m pretty much the opposite world of a 20-year-old freshman girl at an SEC school, a Southern school, rushing sorority. So it’s a whole new world for me.

Most people happened upon these videos, because they are popping up in their “For You” section on TikTok.

It seems there is no rhyme or reason as to why TikTok thinks everyone wants to watch these videos. But, one thing’s for sure, once you start watching them, you won’t stop!

It is kind of like watching your own little reality TV show, where you get invested in all the players, and you even start to choose your favorites.

It’s also a chance for a “normal person” to get to experience something they might never even know about.

Part of the appeal of the sorority rush videos is likely the escapism that they provide to those watching them.

What exactly does it take to “rush” a sorority?

Well, the bottom line is: Money. It isn’t cheap to be in a sorority.

Just to even start the pledge process at UA, there is a $350 registration fee. Of course, this fee “covers the cost of Recruitment publications, facility usage, transportation, security, and two recruitment t-shirts.”

Then, once you are in, the REAL money starts.

You have to pay to live in the sorority house (which can cost upwards of $9400 A SEMESTER!). You can live outside of the house, but it will still cost you about $4500 a semester just to be a part of your sorority (“Includes chapter meal plan, local chapter fees, and national fees”).

But, that is just the tip of the financial iceberg.

There are also all those new dresses the ladies will need for date parties, over-the-top Spring Break trips, and let’s not forget about all those sorority logo t-shirts the girls buy to show their loyalty to their sorority (those are all out of pocket expenses).

No, being in a sorority is NOT cheap. It’s definitely not something that the average person would be able to participate in.

And, like I said, that is part of the draw of watching these TikTok videos.

Now, #BamaRush has come to a close for this year, but don’t be sad. Other universities are just beginning their rush weeks, and we are likely to see #TennesseeRush on TikTok in the very near future.