Have Unwanted LEGOs? This Company Will Wash and Mail Your LEGOs To A Child In Need 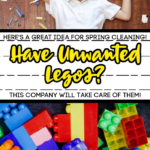 Have you been spring cleaning, decluttering, and minimizing? I’m trying! When it comes to toys the children have outgrown, we usually take them to the thrift store.

Well, if you have LEGO bricks that just are not being played with any longer and the kids are ready to let them go, LEGO has a program for that!

It’s called LEGO Replay and they launched a few years back. All that you need to do is gather them and place them in a cardboard box.

We know people don’t throw away their LEGO bricks. The vast majority hand them down to their children or grandchildren. But others have asked us for a safe way to dispose of or to donate their bricks. With Replay, they have an easy option that’s both sustainable and socially impactful.

Tim Brooks, vice president of environmental responsibility at the LEGO Group, said in a news release

Once you have them ready, print our a free shipping label that is provided by the LEGO Replay program and ship them off!.

When they get to the Give Back Box facility, they’ll all get sorted, inspected, and washed.

LEGO Replay is partnered with Give Back Box and the LEGO Bricks get distributed to different programs. Programs like Teach for America and the Boys & Girls Clubs of Boston.

This is a great way to pass on the LEGO fun to other kids! It doesn’t even take much effort, you don’t have to sort the LEGO bricks or anything.

You can find out more and print your shipping label on the LEGO Replay website.

1shares
Build-A-Bear Just Released Animal Crossing Bears
← Previous
Kim Kardashian Has Made The 'Forbes' List Of The Richest People In The World
Next →
Click here to cancel reply.