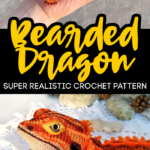 We had a bearded dragon named Larry, he died earlier this year and it was super sad.

See Larry was a rescue and we have no idea how old he was, but he spent a few years with us and he was so cool!

Bearded dragons make amazing pets that are pretty simple to care for and they’re so laid back.

Now that he’s gone, my youngest daughter is so sad, but she doesn’t want to replace him with another, but I saw this and I think she would love it.

If only I could crochet… I need to hunt down someone to make one for her.

Many people have picked up new skills like crocheting and knitting over the past two years as a way to fill in some time, but my hands can’t manage it.

Kseniya is a Russian toymaker and she has an Etsy shop where she sells patterns for people.

She also has other reptile crochet patterns besides the bearded dragon and every single one of them is so cool with so much detail!

The patterns are an instant download so you’ll be able to get started right away on your new critter!

Kseniya’s bearded dragon pattern is a 66-page PDF with 180 photos to help guide you.

There are even video lessons!

The finished bearded dragon measures 12.6 inches, with super-realistic details that will make people do a double-take!

I cannot reach this web site. I would love to crochet your bearded dragon but if I can’t reach the site then no directions. Please help if you can.