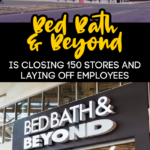 Bed Bath & Beyond will be closing around 150 of its stores, which also means laying off about 20% of its employees!

To fix the struggling business, Bed Bath & Beyond announced that it has secured over $500 million in new financing in addition to closing lower-producing stores and laying off staff.

Slowing sales have caused the business some serious struggles, in fact in this current fiscal quarter sales are down 26% so far.

As Bed Bath & Beyond attempts to regain its customers it will start bringing back popular national brands.

We are embracing a straight-forward, back-to-basics philosophy that focuses on better serving our customers, driving growth, and delivering business returns.

Apparently, its stock shares are down 26% in premarket trading and it will sell shares, but they have not disclosed the amount.

Other changes the company is making to try to juice up the company again are leadership changes.

Chief Operating Officer John Hartmann has departed and the role has been eliminated altogether.

CEO Mark Tritton and Chief Merchandising Officer Joe Hartsig were removed from the company’s board as part of these changes as well.

The company has spent money on store remodels, private brands, and stock buybacks which puts them in a difficult spot and they have a long ways to go climbing back to the top.

A step toward climbing back up includes the dropping of around 9 of its private labels.

Bed Bath & Beyond is also discontinuing three of its exclusive brands which are: Haven, Wild Sage, and Studio 3B.

The other exclusive brands will have reduced inventory at this time.

So what I want to know is, when the big clearance sales start because I would love to get Christmas shopping done right now under budget!