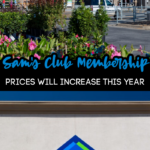 Yes it’s official; Walmart has raised the membership price to shop at Sam’s Club for the first time in nine years.

Shoppers should note that annual fees will increase from $45 to $50 for club members while “Plus” memberships will raise in price from $100 to $110.

The recent price increase is the first time in nine years where club members will soon have to pay more to shop, and is also the time first for Plus memberships to increase since being introduced in 1999.

They says there’s a first for everything, but did it have to include our grocery store runs too?

The company says that the price hikes are due to new brands entering store doors alongside technology investments and improvements inside all 600 stores.

While memberships are on the rise, President and CEO of Sam’s Club, Kath McLay said they haven’t forgotten about inflation pressures shoppers face everyday.

In a letter to all Sam’s Club members, Kath McLay noted, “We are mindful of the financial pressure on wallets right now,” and will hand out $5 to Club members and $10 to Plus members in Sam’s Cash.

Shoppers should be prepared for price increases to take effect on October 17th.