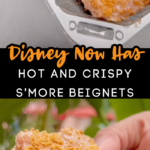 Since Disney’s The Princess and the Frog film released 12 years ago, doughy beignets have been a big hit.

While some have tried to replicate the recipe and even Popeyes released their own version of the sweet treat, Disney was inspired by their own film and have introduced Tiana’s beignets with a fireside twist!

Downtown Disney is now serving a plate full of s’more beignets that are fried until crispy, golden to perfection with honey graham cracker crust, dipped in chocolate glaze, surrounded by a soft and pillowy dough, and paired with marshmallow dipping sauce; (that’s where the s’mores part comes in).

Disney basically does the work for you, aka melting the marshmallow, including the graham crackers, adding in chocolate glaze and frying the dough without having to burn any firewood.

TikToker @wondersofmagic shared the new food find on TikTok which has since made mouths water, tickled tastebuds and of course, gone viral with over 100 thousand likes.

The new s’more beignets come in a 4 pack for $14 at Jazz Kitchen Express in Downtown Disney including a side of the melted marshmallow dip, because what’s a s’more without any marshmallow; a world I don’t want to live in.