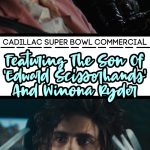 Edward Scissorhands is still, to this very day, one of my all-time favorite movies. I was super excited to see Winona Ryder return to her role as Kim in this Cadillac commercial for the Super Bowl.

The Super Bowl is known for it’s commercials. Even though some companies have chosen to forgo the commercials this year, there are still going to be plenty of them.

The Cadillac commercial comes across like an ‘Edward Scissorhands’ sequel because it is based on the son of Edward and Kim. The son is named Edgar Scissorhands and is played by Timothée Chalamet.

This is the story of a boy with scissors for hands. No, not that one.

Winona Ryder’s as Kim says in a voiceover

The commercial starts off by showing the struggles Edgar has with his scissorhands. His mother notices that he really wants to be able to drive.

He has to take the bus everywhere and it shows him getting banned from the bus.

So she get’s him an electric car from Cadillac that features handsfree driving. To be honest, that all freaks me out, but anyhow…

Due to Edgar’s special hands, he is unable to drive a normal car. The commercial showcases the LYRIQ’s hands-free driving feature called the ‘Super Cruise’.

I’m not sure if it will win the Super Bowl commercial wars, but I enjoyed it! Everything from the music to the appearances, great job!

Watch it below and let me know what you think!

485 shares
Matthew McConaughey Is Flat In This Super Bowl Commercial And I Can't Unsee It
← Previous
The Falcon and The Winter Soldier Trailer Was Just Released and I'm So Excited
Next →
Click here to cancel reply.