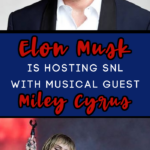 Here is something to file away in the just plain WEIRD category.

Elon Musk will be hosting SNL, and the news has not been met with positive feedback thus far.

Yes, I said Elon Musk — as in, the eccentric techy CEO of Tesla.

The SAME Elon Musk that had little baby X Æ A-12 with quirky musician Grimes.

Musk is scheduled to host SNL on May 8th, with musical guest Miley Cyrus.

You gotta admit, this is going to be one interesting show.

Now, not only is Elon a weird choice to host SNL, since he isn’t from the entertainment industry — like AT ALL.

BUT, he recently shunned the media, so I have to wonder why he even WANTS to host the popular sketch comedy show.

This isn’t the first time that SNL has made a seemingly odd choice for host — as Donald Trump hosted back in 2015.

This time, however, the announcement of Elon Musk hosting was met with a bit of backlash from fans of SNL.

Some fans have started a petition stating that Miley Cyrus should be both the host AND the musical guest.

But, I’m betting the show is going to go on with Elon Musk at the helm.

The hosting announcement comes one day after Musk’s SpaceX Crew Dragon launched its second flight to the International Space Station.

Look for Elon Musk and Musical Guest Miley Cyrus to appear on the show Saturday, May 8th.

What do you think? Is Elon Musk a wise choice for SNL host?