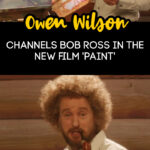 Owen Wilson is — but isn’t really — Bob Ross in his new movie that’s coming out in April.

Technically, this movie has nothing at all to do with Bob Ross, but good gosh! Owen sure looks just like him, doesn’t he?!?

The movie is about a public TV painter (sound familiar?) named Carl Nargle, who enjoys painting happy little trees and seems to have it all.

[Nargle is a] a Bob Ross–esque PBS painting show host — [with] a signature hairdo, a custom van, and fans hanging on his every stroke.

But that’s all about to come crashing down when a “younger, better artist” enters the picture and “steals everything (and everyone) Carl loves.”

We’re thrilled to finally work with the boundless and versatile talent of Owen Wilson, as he effortlessly brings Carl Nargle’s character to life from a savvy script and direction by Brit McAdams.

Y’all. This sounds like it’s going to be hilarious!

I can already tell that this is going to be one of those movies with a cult-type following — the kind that comes around like once in a decade.

Paint has all the makings of a quotable comedic masterpiece, and we hope audiences of all ages are ready for a lot of laughs and a lot of heart.

Owen Wilson is going to be taking center stage in Paint, but there will also be some lesser-known faces that you will recognize.

Get ready for Paint to drop into theaters in April of 2023.