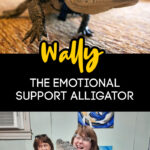 I’m sorry. What? Am I seeing this wrong?

I’ve heard of emotional support dogs. I even know a couple that are the sweetest creatures on earth.

But, this guy has an emotional support alligator — yes, ALLIGATOR — and it even loves to give hugs.

Wally the alligator is no ordinary gator. He belongs to Joie Henney, and he exists to give emotional support.

Well, I mean, he EXISTS to be an alligator, but Joie loves to keep him around to “help cure his depression.”

According to CNN, Joie “adopted” Wally six years ago when he was considered one of many “nuisance alligators” in Florida.

Typically, when an alligator is considered a nuisance in Florida, it is either euthanized or transferred somewhere it can live in captivity without bothering humans.

When Wally was only an itty bitty gator — measuring in at 20 inches long — a friend of Joie’s brought the baby gator to Pennsylvania.

This is where Joie and Wally became inseparable.

Side Note: According to Joie, he has worked with alligators for 30 years. This wasn’t just a random pairing.

Wally has been quite different than any alligator I’ve ever dealt with in the past 30 years — He doesn’t show anger. He doesn’t show aggression. He hasn’t since the day he was caught. We never could understand why.

I’m so confused here. It’s an alligator. Isn’t Joie afraid Wally will snap and bite a hand off?

He’s just loveable. He sleeps with me, steals my pillows, steals my blankets. He’s just awesome.

Wally is so docile and friendly that Joie had him registered as an official emotional support animal.

Joie even takes Wally around on a leash, and introduces him to others for hugs and the occasional picture.

Um — I wouldn’t mind seeing Wally in person, but I draw the line at hugging alligators — I don’t care how friendly they claim to be.