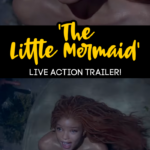 My girls always loved ‘The Little Mermaid’ when they were little, and still will watch it as teenagers.

We are so excited about Disney’s live action ‘Little Mermaid’ movie!

Disney’s original animated version of ‘The Little Mermaid’ came out in 1989, dang I feel OLD!

After all of these years, it still remains a favorite movie for most Disney fans, and I have no doubt the live action will have the same love.

Halle Bailey plays the mermaid Ariel and we finally have a chance to see her in this trailer that was just released at D23!

In the trailer we get to see Halle Bailey as Ariel singing “Part of Your World” and it’s amazing!

Watch the new trailer below and let us know what you think because we are super excited over here!