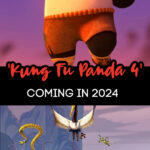 Kung Fu Panda is BACK with the 4th installment of the movie for the film franchise.

My kids are going to FREAK OUT when they hear this news. It’s about to be everything kung fu at my house.

Every single time one of the Kung Fu Panda films comes out, it’s the same thing. My son becomes a kung fu master — in his own mind — and my daughter has to have every piece of swag related to the movie we can find at Walmart.

The film will follow the further adventures of wide-eyed Po in ancient China, whose love of kung fu is matched only by an insatiable appetite.

Now, the film already has a release date, March 8, 2024, but they have yet to announce the director for this particular sequel.

BUT, the director isn’t the story here. It’s Jack Black making a return as Po, and Dustin Hoffman as Master Shifu.

Of course, we will get the return of Angelina Jolie as Tigress, Seth Rogen as Mantis, Jackie Chan as Monkey, Lucy Liu as Viper, David Cross as Crane, James Hong as Mr. Ping, and Randall Duk Kim as Oogway.

Did you even realize there were SO many A-list celebrities in Kung Fu Panda?!? No wonder it’s so good, right?

You can catch the OG Kung Fu Panda right now on HBO Max.

The sequels, Kung Fu Panda 2 & 3, can be watched on Netflix with a subscription. OR you can rent them from Prime Video for about 4 bucks.

But, now we get to play the waiting game until March of 2024, when Kung Fu Panda drops in theaters.

Get ready for crowded theaters, because I promise you, every kid is going to want to catch up with Po and his antics.