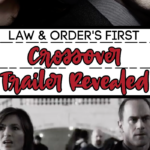 The crossover event Law & Order SVU fans have been growing old from is finally here and with video proof!

After 10 years in the making, Olivia Benson and Detective Elliot Stabler are finally reconnecting.

In the final moments of the shocking new trailer, Benson’s face will be similar to yours when you hear Detective Elliot Stabler return as he says “Liv” in the background of a crime scene.

The two-hour special will be a crossover between Law & Order: SVU and the new spinoff series Law & Order: Organized Crime, which primarily focuses on the story of Stabler’s character while reprising his role as a detective in New York City.

The crossover episode will air on Thursday, April 1st which means we’re only about 1 month away to see this famous reconnection ladies and gentlemen!

The long awaited crossover episode will serve as the launching point for Chris Meloni’s new series as Detective Stabler which will air on Thursdays at 10 PM ET on NBC following the crossover special.