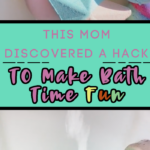 “Mom life is not for the weak.”

This is a caption written by a mom who has recently gone viral because her almost four year old is not a fan of taking baths.

Mom and TikToker @kelseyvenkov shared her hack via social media explaining how she made bath time fun for the kids who fight on getting inside the tube.

Yes, a fizzy and colorful product made out of baking soda eases her four year old and makes bath time something to look forward too.

The video begins with a few shots showing a variety of bath bombs courtesy of Target, so when bath time does come around, her four year old can pick from a selection of different colors and shapes.

“Lately she has been fighting me on taking a bath, and just does not want to do it, so I needed to come up with a solution,” she said during the TikTok video.

“So I thought it would be fun to create an experience for her, so every time she gets to take a bath, she picks one of her favorite bath bombs and gets to put it in the tub,” she went onto say. “I went to Target and picked up these pretty bath bombs, and some of them even have little surprises inside, so I know she’ll be super excited about it.”

The following video shows the mom’s tube filled with a bright blue color that looks like an ocean somewhere on a tropical island.

Venkov even recommends having “Bath Dropz”on hand, just incase there ever comes a time where the bath bombs have run out and mom hasn’t had the time to make a quick trip to Target.

The video which has nearly two million likes and over five thousand comments, is showing up on the “for you page” of hundreds of thousands of moms who have similar struggles when it comes to bath time.

One user even commented,

“I did this with my son and now it’s a fight to get him OUT of the tub.”

Others have also commented their own suggestions regarding what works for their kids so there’s less fighting getting in and out of the tub.

However, even though bath bombs can be colorful, fun, and, soothing some parents have expressed their own concerns of some bath bombs that can cause infections.

According to Healthline, parents should be cautious and understand what ingredients each bath bomb is made out of to make sure what’s dropping in the bath is safe for the kids.