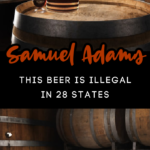 Samuel Adams just made a beer that is so good, it’s illegal in 28 states.

Okay, that’s not ENTIRELY true. Yes, it’s illegal in 28 states, but it’s because of the alcohol content of the beer, and not because it’s so good. (But it IS one of the best beers out there!)

WTF?!? Yep. There are still states out there that have archaic laws on the books that date back to the time of prohibition. You would THINK they would have amended these laws by now. But, NOPE. They still stand.

What makes this Samuel Adams beer so controversial in so many states? It’s all about its alcohol by volume (or just ABV). See, most beers are below the standard 5% ABV that is allowed in most states.

In contrast, this new Samuel Adams beer has 28% ABV. *Gasp* That’s just too high for some people!!

Keep in mind that spirits like Vodka and Tequila hover at about 40% ABV.

So, while this Samuel Adams beer is on the high side of ABV, it is by no means the hardest stuff out there.

If you are a beer aficionado, get ready! You will want to sample this beer.

The beer in question is called Utopias, and it is released in limited batches every two years — and trust me — if you are a beer aficionado, you will want this beer.

Available starting October 11, the 12th biennial edition of Utopias was finished on 2,000 pounds of cherries, including Michigan Balaton cherries, to bring a slight sweetness and touch of tart flavor to this 28% ABV rarity.

Now, you might just choke a little bit when you hear how expensive Utopias is. Keep in mind, this is a very limited beer, you can’t get it in 28 states, and it only comes out every two years.

A bottle (one bottle) of this Utopias batch of beer will run you a suggested price of — wait for it — $240!

Sam Adams Utopias is a spirited blend of multiple batches of our extreme beers, some held in reserve for just this coveted biennial release. In fact, some of the beer dates back nearly three decades, aging in wooden bourbon casks. Brewers then finish the blend in a combination of Carcavelos, Madeira, Ruby Port, and Sherry Oloroso barrels. This year, for the first time, brewers also aged a portion of the blend in Sauternes French oak wine casks which brings subtle notes of honeyed apricot and caramel to the rich layers of flavor.

You might just have to plan a road trip to visit your friends in one of the states that can legally sell Utopias.

It would be pretty cool to try a bottle — just to say you’ve done it!

By the way, the very first bottle of this batch of Utopias is going to be auctioned off to the highest bidder, with proceeds going to St. Jude Children’s Research Hospital. For more information, you can go to stjude.org/launchparty.