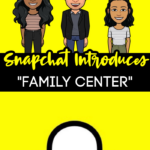 Snapchat piles on the safety measures.

As an effort to protect kids who use the app, Snapchat has created a new supervision tool for parents nearly ten months after an executive from the company told Congress features were in development to help keep teens safe.

Introducing “Family Center” a hub that allows parents to see who their kids are messaging without actually seeing the individual messages.

However, not only will the parents need to make a Snapchat account, but parents and kids must accept the Family Center invite for the hub to be launched and used.

“Family Center is designed to reflect the way that parents engage with their teens in the real world, where parents usually know who their teens are friends with and when they are hanging out — but don’t eavesdrop on their private conversations,” the Snapchat stated in a blog post.

After Facebook whistleblower Frances Haugen raised concerns about the impact of Meta’s platform with younger individuals, several large tech platforms were called to testify before Congress.

Both political parties including Democrats and Republicans in the Senate Commerce subcommittee on consumer protection raised concerns that social media platforms have been harmful to kids.

The Snap VP of global public policy, Jennifer Stout told Congress that “there is more work to be done”.

Several apps such as Instagram, have introduced new features that include new parental controls and protection for children’s safety while on social media.

The Family Center will include even more safety features in the coming months according to Snapchat, but this isn’t the first time the social media app has added safety precautions for teens who used it.

Some of the tools to be expected are allowing parents to see new friends that have been added, confidentially report concerning accounts, while also giving teens the option to notify their parents when they report something of concern on their own.

Online safety experts have been consulted with these developments.