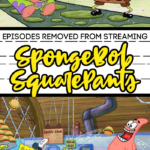 ‘SpongeBob SquarePants’ has always been a favorite for our family. It’s one cartoon that we can all watch together and laugh at, and yes… it’s a weird show.

However, apparently, 2 episodes of ‘SpongeBob SquarePants’ have been removed from Nickelodeon, Paramount+, and Amazon due to “inappropriate content”.

One episode is titled “Kwarantined Crab,” and is from the 12th season (2019) on ‘SpongeBob SquarePants’. I’ve never seen it, so I can not speak about how I felt about the episode.

I’ve read that it is based on a virus storyline, which is pretty apparent from the title of the episode.

We have decided to not air it due to sensitivities surrounding the global, real-world pandemic.

The patrons of the Krusty Krab are obviously anxious and start freaking out about who may have the virus and they toss them in a freezer. Again, I have not watched the episode so I don’t know anything other than what I am writing here.

The other episode that has been removed is called “Mid-Life Crustacean”. It was actually removed from rotation back in 2018. Again, I do not believe this is an episode I have watched before.

We determined some story elements were not kid-appropriate.

In this episode, SpongeBob, Patrick, and Mr. Krabs break into a woman’s home and they steal her underwear. I’m not sure what the context is behind it and I can’t make an opinion, though it sounds a bit weird.