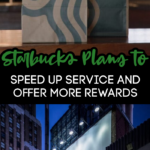 Starbucks is adding speedy service to their resume.

Starbucks has a plan to spark more growth within stores and that plan includes faster iced mochas, more rewards, and a better work environment for employees.

And it all starts with coffee on tap; new equipment that will allow baristas to make those complicated five layer iced coffees in seconds, Starbucks also plans to introduce new rewards with a remodeled app.

“We’re not reinventing what we do,” interim CEO Howard Schultz said during the company’s recent investor day. “We’re just reinventing how we do it.”

Howard briefly introduced the chain’s plan to employees and the public in an open letter that announced,

“the Starbucks business as it is built today is not set up to fully satisfy the evolving behaviors, needs and expectations of our [employees] or customers. It is not designed for the future we aspire to for ourselves and the communities in which we serve, said Howard.

TikTok inspired concoctions are an example of some of the new habits that have made it harder for employees to prepare drinks which in return creates longer wait times.

“One of our challenges today is that we’re not able to meet the capacity of demand that is coming through our stores,” mentioned Brady Brewer, chief marketing officer at Starbucks.

A new improvement called the “Siren System” will help decrease the time it takes to make iced drinks with faster blenders and new dispensers that will be set up in a line on top of the table rather than under the counter.

Tested, baristas were able to make Frappuccinos in 36 seconds versus the 87 seconds without using the Siren System.

And the Siren System doesn’t only aid with drinks but it also helps with cooking the food too, including fancy ovens that can heat batches of food rather than one serving at a time.

Starbucks plans to introduce the Siren System to more chains in 2024.

And the improvements don’t just stop at the kitchen because the mobile app is also getting a few upgrades as well.

“As many of you are aware, our mobile app has had a few brief outages over the past few months,” stated Deb Hall Lefevre, Starbucks’ Chief Technology Officer.

“Even a few minutes of downtime can mean … confusion in our stores and, of course, lost business opportunities,” she mentioned. The company’s first priority is to make the app function reliably, she explained: “Things just need to work.”

Examples of improvements will include showing real-time order updates for your preferred caffeinated fix and joint rewards program with other companies like airlines!

Rewards members will also have the opportunity to purchase or earn NFTs beginning later this year.

And when it comes to the drive-thru, Starbucks plans to add a,

“a frictionless payment program that will automatically recognize and authenticate our customers as they pass through,” Deb Hall said.

Considering Starbucks plans to open 2,000 new stores in the U.S. two years from now, the chain is also aiming to create a broader portfolio that will feature drive-thru and delivery-only locations.

Starbucks tech improvements are not only to help aid hungry costumers but to benefit employees too.

“We have a trust deficit with our partners,” said Frank Britt, Starbucks’ chief strategy and transformation officer “We have not lived up to the highest level of obligations,” he mentioned. “We plan to do quite a bit about it.”

Starbucks says it can only offer the new benefits for non-union employees.

“Workers are glad that Starbucks is taking an interest in issues related to our working conditions; we unionized because we would like to have a real voice in this process,” the group explained in a statement about the investor meeting. “We look forward to negotiating over these conditions at the bargaining table.”