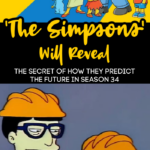 ‘The Simpsons’ have been several steps ahead of everyone for years, there are so many episodes that seem to predict things that eventually ended up happening.

Season 34 of ‘The Simpsons’ is about to come out and Matt Selman said that they will reveal just how ‘The Simpsons’ have predicted the future, and I can’t wait to see this one!

You have to admit it’s been pretty weird right? From the Covid pandemic, Donald Trump becoming president and so much more!

I’m excited about Season 34. It’s probably the best 34th season of any show you’ve ever seen. We have two Halloween episodes this year, two ‘Treehouse of Horror’ episodes. One is three scary stories like we always do, but very scary and weird. We have an anime parody of ‘Death Note,’ which I’m so excited about. The full-length episode is a parody of Stephen King’s book ‘It’ with, get ready for it, Krusty as Pennywise.

He also talked about celebrity guests that would be featured in Season 34 of ‘The Simpsons’.

We have Simu Liu from Marvel’s ‘Shang-Chi’ in an upcoming show as Lisa’s perfect future boyfriend. We have our season premiere where Homer gets into a conspiracy cabal while hunting down a missing turtle. I’m very excited about one where Krusty has a kind of nice-guy-type afternoon syndicated Ellen DeGeneres talk show that surprisingly goes awry. And then we have huge guest part for iconic comedy legend Melissa McCarthy coming up. It’s a really juicy, funny part where she plays a kid who’s Homer’s rival for love from Grandpa. She’s plays kind of a quirky kid who has Grandpa’s love and Homer’s like, ‘Why does Grandpa like this kid? And why didn’t he like me?’ It’s really emotional as well.