Our daughter is a high functioning Autistic daughter. Our son isn’t. Neither are what you’d call social butterflies. We don’t go to a lot of parks, because parks mean people and a high likelihood that we’re all just going to sit on a bench watching other kids play. Not all that much fun for any of us. That said, if one of the two express any interest in doing something out of the house, you bet your bippy we do it. Only, I never expected to find a woman openly carrying a gun at a children’s park, and once I saw it I decided to fight ‘possible fire’ with Barbie Girl… 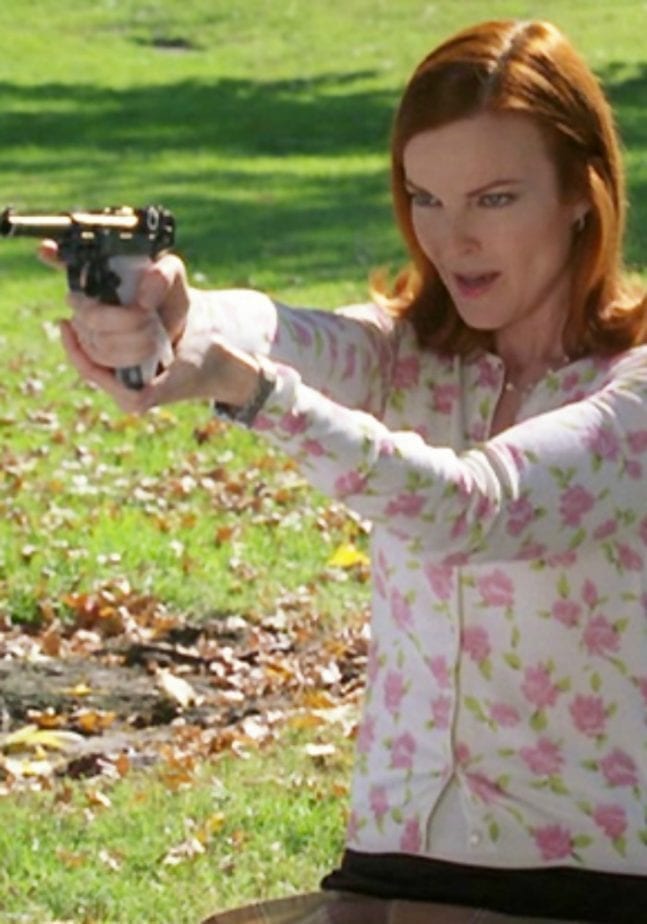 It was still fairly early out, and while my son was only half-interested in this trip, my daughter went hog wild. I think for her it was the perfect storm. Only about six or seven kids on a very large play space, I probably gave her something with sugar in it for breakfast and she had to have woken up on the right side of the bed while an angel flew overhead strumming a harp in D minor. Rare form. You get it.

One thing I get about my stepkids, the children of my heart, is that we’re introverts. We unite in our own spaces, doing our own things, and that’s awesome. We get each other. So I’m not the kind of person who is going to sit at a playground and chat up total strangers. Honestly, I don’t know if they’re going to make me one of the hive, so I’d rather take my chances on my own bench reading a book.

Except… There were these three Stepford moms having a very loud discussion.

At one point, the Stepford that wouldn’t sit down said something truly outlandish.

I couldn’t control my reaction.

I lifted my head from the book I wasn’t reading, looked at them, probably making a truly awful one-brow-raised-one-eye-big-mouth-scrunched-up kind of face, and said, “Where’d you hear that?”

The words were out of my mouth before I actually got an eyeful of these women who lived around the block.

And oh, man, do I wish I’d at least glanced their way once before speaking.

Standing Stepford has on her pretty, knee length skirt, ballet flats and blouse, with a handgun strapped to her hip Magnificent Seven style.

All three women glance my way. I mutter something, probably an apology, and they lower their voices, glancing my way several times. My shoes probably didn’t match, there was likely some sort of dried food on my shirt. What? I don’t like mornings. And right about now, I was really regretting being at this park.

So there we were, my two children playing happily, with a petticoat wearing, armed woman I don’t know a dozen feet away.

Let me first say that, this is Texas. A lot of people have licenses to carry weapons. I’ve handled guns. I’ve had my own license in the past, but that is a whole other story.

I automatically make the assumption that when a person is openly carrying a firearm in public, in a nonthreatening manner, they have a license for that weapon. They are arguably the best people to be armed, because chances are that they a) know how to use the weapon b) have their license on hand c) are the kind of person who will use it to protect themselves and other innocents.

But still. This is a park. A private park, but still a park. I’m not crazy or alone in being uncomfortable with this woman toting a gun yards from my children, right?

A few things were running through my mind at this particular point. Namely, how the heck do I snatch up the kids and leave without making a scene. The way my daughter was carrying on and having fun I knew that any mention of going home would start a fight. We really hadn’t been there that long and she’d be right in calling me out for not being fair. Which I’d then have to logically explain my reasoning for leaving to get a rational reaction from her. With some autistic children, “Because I said so,” is just not going to work. Ours is one of those. If you appeal to her logic, you can win her over. But that would involve a lengthy discussion about the constitution and why someone exercising their rights makes me uncomfortable.

I can see that down this path leads destruction.

In one, single instance I could destroy all of the foundation for getting her to understand her rights, from equal pay to voting to… Man, it was too early for this. I did not want to have to start Googling all the parts of the constitution and doing an impromptu history lesson before I was truly caffeinated.

No one was threatening anyone. The Stepford’s firearm was in one of those very expensive, super secure holsters. There were no other safety concerns around us. I just wasn’t comfortable with a stranger carrying a gun around myself or my kids. My step-kids. Lord…was this something I needed to tell their mother about? (Spoiler, Mom and I speak very little.)

So what did I do?

I took a deep breath, opened Pandora and created a playlist based on the 1990’s band Aqua. Hey, you can’t tell me you didn’t ah-ah-ah right along to the Barbie Girl song just like I did. Besides, our daughter loves this crazy DubStep version that drives me insane. At least this way I couldn’t her the Stepfords discussing how to either get rid of me, or assimilate me.

Within the next ten minutes I got enough dirty looks that the trio gathered their kids and left. Was I in the wrong? Maybe. I’ll own that driving people away with ear worms is not the most mature thing I’ve ever done but it accomplished a goal. After another fifteen minutes both children had peopled their hearts out and were ready to go home, to their respective corners and be their normal, introverted selves again. And I was totally on board with this. I believe we all got fruit snacks for making it out of there alive.

What did I learn from this? Always canvas an area I’m going to take my children first. Private parks are out. Public parks are a yes. And next time, I’ll have speakers for my Aqua playlist.

Excellent blog! Do you have aany hints for aspiring writers? I'm planning to syart myy own website soon but I'm a little lost on everything. Would youu advise starting with a free platform like Wordpress or go for a paid option? Theree are so many options out there that I'm totally confused .. Any tips? Thanks!