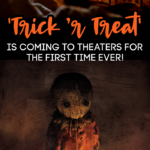 When ‘Trick ‘r Treat’ came out back in 2007, it seemed like Legendary and Warner Bros. didn’t have a plan for it.

They played the movie at some festivals, but it didn’t really get released until 2009, and even then it still didn’t get shown in theaters.

The ‘Trick ‘r Treat’ movie instead went straight to DVD, and you know… it just isn’t the same as watching it on the big screen.

Now, finally after 15 years, the fan favorite will finally get a proper showing in theaters and ‘Trick ‘r Treat’ fans are excited!

An everyday high school principal has a secret life as a serial killer; a college virgin might have just met the guy for her; a group of teenagers pull a mean prank; a woman who loathes the night has to contend with her holiday-obsessed husband; and a mean old man meets his match with the demonic, supernatural trick-or-treater whose name is Sam.

If you love Sam, you really need to check out the selection of fan merchandise that Spirit Halloween has.

Also, several years ago they announced there would be a sequel to ‘Trick ‘r Treat’, yet there hasn’t been any movement forward with this… I think someone needs to step it up!

Warner Bros. Twitter announced the great news that ‘Trick ‘r Treat’ would get its theater release and they are also bringing back other favorites to the theater such as ‘The Lost Boys’!

‘Trick ‘r Treat’ will be playing in theaters beginning Thursday, October 6th, 2022 and I can not wait!