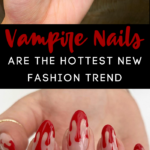 Bloodsucking nails are in fashion.

Similar to the fangs inside of a vampire’s mouth, the newest fashion trend to dress ten fingers are “vampire nails.”

Also known as “fang nails”, these ten acrylics are typically painted with red and white colors during spooky season.

While most will designate the pointer finger and pinky into fangs by filing down the acrylic into a sharp almond shape leaving the other three fingers square, some have only used a rounded oval shape for all ten fingers.

Most commonly seen with this trend are the two designated nails shaped as fangs painted with fake blood dripping alongside the nail to make it look like these nails have just bit into someone’s neck.

Other nail inspiration includes all ten fingers featuring a clear undercoat complete with dripping blood painted in red on all ten fingernails.

It looks like vampire acrylics are in and plain orange pumpkin nails are out.

'Ya gotta show this to Taylor. (Would she bite these too)?