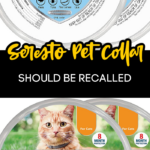 It’s that time of year when pesky, creepy-crawly critters love to feast on our fur babies.

It’s our job to protect them at all costs.

We go out and get them flea-and-tick pills, smelly flea dips, and we top it all off with the strongest flea collar we can find.

But, turns out, the flea collar might actually be harming our pets.

If your pet is wearing a Seresto flea-and-tick collar, you need to prick up those ears and listen.

The House Committee On Oversight And Reform put out a 24-page report warning people of some problems with the Seresto flea-and-tick collar.

The Seresto collar has been super popular, because it deters fleas and ticks for up to 8 months — where other flea collars must be reapplied monthly.

But, as happens too often, just because something sounds better doesn’t necessarily mean it is.

What Is Wrong With The Seresto Flea-and-Tick Collar?

Y’all. This collar is BAD NEWS. If you have it on your pet, you might just want to rip it right off.

As of June 2020, there had been more than 75,000 incidents—what the Environmental Protection Agency (EPA) calls unexpected effects from the use of a pesticide—and approximately 1,700 pet deaths linked to the Seresto collar. Since [that time] the reported numbers have increased to more than 98,000 incidents and 2,500 pet deaths.

The House Committee On Oversight And Reform report

Why there hasn’t been an official recall on the Seresto collar, I have no idea.

If the House Committee has any say in the matter, it WILL soon find its spot on the growing number of recalled items list.

Now, the Seresto collar was indeed approved by the EPA, but there is some question as to whether the approval was rushed.

The California Department of Pesticide Regulation found that key studies that tested the Seresto collar on adult dogs and cats were not acceptable because the studies “greatly under-estimated the exposures” to one of the collar’s active ingredients.

The House Committee On Oversight And Reform report

What Are The Side Effects Of The Seresto Collar?

So, besides death — which is HORRID — what other symptoms are pets that wear the collar experiencing?

The pets are experiencing skin irritation and skin lesions over large sections of the animals skin. These lesions don’t get any better when the collar is taken off the pet.

There are other symptoms to the Seresto collar, and they read like a bit of a horror story.

Sounds like a poisoning, doesn’t it? Poor fur babies.

Bottom line: if your pet is wearing the Seresto collar, you may want to rethink its use.

To read the entire report by the The House Committee On Oversight And Reform you can go HERE.