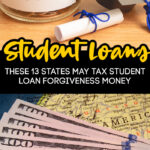 The good news is, that money is not going to count as earned income as far as the federal government is concerned.

That means you aren’t going to be federally taxed to death on the sum of money that’s knocked off your student loan bill.

The BAD news is, that money just might make you liable for state taxes on the forgiven sum of money.

That means that you just might receive a tax bill from your state for that money — they are going to count it as earned income on top of your salary and wages.

What States Are Going To Tax Student Loan Borrowers On Their Forgiven Money?

Now, not EVERY state is going to be affected by state taxes on the money.

States which follow the federal treatment here will likewise exclude debt forgiveness from their own state income tax bases. But, for a variety of reasons, not every state does that.

There’s a whole lot of legal talk about how and why states may tax the money.

Basically, some states use the federal tax laws as a jumping off point for their own state laws.

Some states follow the guidelines strictly, and some states kinda follow it loosely but do their own thing.

So, I guess the thing you are really wanting to know is if your state is going to be one of the ones that end up taxing the money.

Now, it’s important to note that none of this is guaranteed. States still have time to adjust their tax laws, making the money non-taxable.

BUT, they may just decide they want their part of the pie, so to speak.

The states that might decide to tax you on your student loan forgiveness are outlined by taxfoundation.org.\

Do you see your state listed? If you live in one of these states, and you aren’t sure what to do, it is important to talk with a tax professional. They can walk you through the process, and probably give you some guidance.