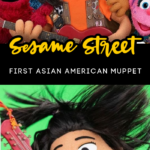 Sesame Street. I just love you! You are totally on point lately, and we are here for it!

One of the FIRST things they did was introduce a Latina character back in 2016.

Next, we got a muppet with autism, and they showed the awesomeness that goes along with it.

Then, they celebrated Pride Month by introducing us to the street’s first same-sex family.

NOW, they are diving even deeper into diversity by introducing us to Ji-Young, the show’s first Asian American muppet.

Ji-Young is a “Korean American 7-year-old who loves playing her electric guitar and skateboarding,” as so many kids do. She also enjoys rock music and those tasty Korean rice cakes, tteokbokki.

She’s a musician, she plays electric guitar, she’s a girl of the very modern American fabric. She recognizes the culture through her relatives — her grandmother, through her mother — and through the food she eats and loves.

Alan Muraoka, who plays the owner of Hooper’s Store and is also Asian American.

She will make her appearance on the show just in time for the Thanksgiving holiday, premiering next week on HBO Max and local PBS stations.

Ji-Young’s puppeteer is also Asian American. Kathleen Kim started working on Sesame Street back in 2014, and feels like she has a lot of responsibility to teach needed lessons and to be a role model that she really could have used when she, herself, was a child.

So, in Korean traditionally the two syllables, they each mean something different and Ji means, like, smart or wise. And Young means, like, brave or courageous and strong. But we were looking it up and guess what? Ji also means sesame.

Be looking for Ji-Young and her friends when “See Us Coming Together: A Sesame Street Special” debuts on Thanksgiving day.