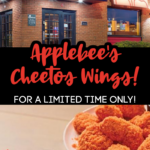 Applebee’s is adding some new things to the menu for a limited time only and I am so excited to try them!

Cheetos flavored wings, which were previously only available online through the companies online company called Cosmic Wings, will now be available in Applebee restaurants!

The Cheetos flavored wings will be available in a boneless version and in your choice of Original Cheetos or Flamin’Hot Cheetos sauce.

It gets even better, they’re also coated in crushed Cheetos!

They’ll also be serving up Cheetos Cheese Bites, which are also covered in crushed Cheetos!

Apparently, this is a promotion to try and draw a younger crowd to the restaurants as well as to promote Cosmic Wings.

The boneless versions of the Cheetos flavored wings in Original and Flamin’ Hot Cheetos, plus the Cheetos Cheese Bites, will be available in Applebee’s restaurants for a limited time starting now.

It looks like the 10 piece orders are selling for about $9.99, which one will you be trying?

I think we’ll get one of each thing so we can all share and taste everything, I have a feeling the Cheese Bites will be my favorite!