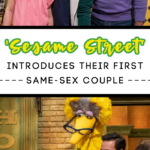 ICYMI — June is Pride month, and everyone is celebrating in their own special way.

Sesame Street — yes, the iconic PBS series that you can currently catch on HBO Max or YouTube — is celebrating this month of love equality by taking the show to a place it has never before been.

We have seen the children’s television show branch out and include all sorts of different characters on the street famously known for its monsters, families, friends, learning, and fun.

Although Sesame Street has touched on the topic of family equality — I mean, we’ve expected things about Bert and Ernie for YEARS — we’ve never before seen a family as part of the show who is part of the LGBTQ community.

Until now, that is!

In an episode titled “Family Day,” we were introduced to Frank and Dave, 2 gay dads who are raising their daughter, Mia.

Dave is the brother of show regular Nina, the young bilingual Hispanic woman who owns the bike shop on the street.

Frank and Dave, as Mia’s dads, are the latest characters in an undeniable trend of inclusion across kids & family programming, one that allows millions of proud LGBTQ parents, and our children, to finally get to see families like ours reflected on TV

Alan Muraoka, who plays the current owner of Hooper’s Store (RIP, Mr. Hooper), directed the “Family Day” episode, and he shared the news about this important episode on his Facebook page.

I am so honored and humbled to have co-directed this important and milestone episode. Love is love, and we are so happy to add this special family to our Sesame family. Happy Pride to all!!!!

This isn’t the FIRST time that Sesame Street has brushed on the topic of LGBTQ equality.

On the 2017 Father’s Day episode of Elmo’s World, Elmo spent some time exploring what exactly a father was, and why we celebrated a day dedicated to dads.

During this segment, the narrator gave a nod to same-sex families by saying, “You might have a stepdad, or even two dads.”

Later that same year, they were exploring the Letter Of The Day, like they usually do on Sesame Street, and it was “F” this particular day.

“F” stands for FAMILY they said, and they acknowledged that there were all kinds of families.

“I love my moms,” one child said in the episode, just before getting kissed by both of her moms.

Sesame Street has ALWAYS stood for equality amongst people, but I really can’t believe it has taken them THIS long to have a same-sex couple on the show.

They have previously had guest appearances by openly “out” celebrities, but they haven’t yet introduced an LGBTQ family on the show.