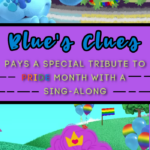 Blue’s Clues is all about celebrating Pride, and their new sing-along, starring drag queen Nina West, is a celebration love letter to all the LGBTQ families.

ICYMI, June is PRIDE month, and we are here for it!!

Bring on all the colorful rainbows and everything Love Wins!!

Nickelodeon, who brings us Blues Clues, is celebrating the first week of Pride Month with a new special sing-along video.

In her musical Blue’s Clues debut, Nina West sings about different families — all in the LGBTQ community.

This family has two mommies. They love each other so proudly and they all go marching in the big parade.

The song goes on — and so does the big parade — and it pulls in even MORE members of the LGBTQ community, includes trans and nonbinary people.

Ace, bi and pan grown-ups you see can love each other so proudly.

Don’t worry, they also bring in mention of heterosexual queer supporters — queer community allies, if you will.

All families are made differently and they love each other so proudly. Allies to the queer community can love their queer friends so proudly… Love is love is love, you see, and everyone should love proudly.

Nickelodeon collaborated with Lindz Amer, who produces the video series Queer Kid Stuff, to bring us this spectacular video about love and acceptance.

Queer folks are not a monolith and I can’t possibly make every single queer person happy, especially considering the profound lack of LGBTQ [representation], especially in preschool content. All we can do is try our best and I think we did a pretty good job!

Amer hopes that families, kids, and those in the queer community can see themselves in the Blue’s Clues video.

Everything I do is in an effort to spread queer joy and this video fits perfectly in that mission.

Response to the video has been mostly positive, which we can all agree is a good thing!!

You can watch the entire Blue’s Clues Pride Parade video on their YouTube channel.