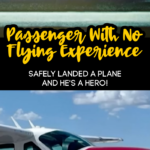 I would like to think that I am able to stay totally cool and calm in stressful situations, but I’ve never had to fly and land a plane.

A man with absolutely NO flying experience did just that and he is a hero in my book!

I have no idea how to fly the airplane.

The passenger was flying on a single-engine Cessna 208 and suddenly the pilot was “incoherent”, I think I would have pooped my pants!

Thankfully, Robert Morgan, an Air Traffic Controller was available to help talk the passenger through it since he is a certified flight instructor.

I rush over there and I walk in and the room is really busy … and they’re like, ‘Hey, this pilot’s incapacitated. The passengers are flying the plane. They have no flying experience,

The passenger had been around aviation and had watched pilots fly, but he had never done it himself, he must have been terrified!

Robert Morgan said he was really calm though, which makes the situation a bit better.

Robert had never flown the Cessna model, but he was able to pull up images of the instrument panel so that he could talk the passenger through flying and landing the plane.

Try to hold the wings level and see if you can start descending for me. Push forward on the controls and descend at a very slow rate.

Try to follow the coast either north or southbound. We’re trying to locate you.

Robert decided it was best to help the passenger get to the largest airport in the area so that he would have more space to do the unimaginable!

just so he could just have a really big target to aim at.

This passenger accomplished something that takes at least 20 hours of flight school to learn, and that is with a pilot with you and to help!

They said the passenger’s landing was rated a 10 out of 10 and everyone was stunned and shocked at how perfectly he nailed it!

I felt like I was going to cry then, because I had so much adrenaline built up. I was really happy that it worked out and that nobody got hurt.

What an absolutely amazing story!

The passenger was anxious to get home safely to his pregnant wife and he accomplished it!

You just witnessed a couple of passengers land that plane

As of this writing, we are not sure what the medical episode was that incapacitated the pilot, but we sure hope he is ok!

You can watch the video here!