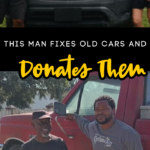 There is a guy in South Carolina who fixes up old broken down cars that would otherwise be junk cars, and then gives them to people who desperately need the transportation.

Eliot Middleton is a local restaurant owner — Ribs and Barbecue *YUM* — but he is also a part-time mechanic on the side.

He used to watch his father, a talented mechanic, fix up cars, and now he is following in his dad’s footsteps and helping people in need at the same time.

Living in rural South Carolina, there isn’t any reliable public transportation, so people have to rely on their vehicles to get them around — only, not everyone can afford a vehicle.

You don’t have a car, you don’t have a career. How will people who have no reliable buses, no Ubers, travel to the city, where they would be able to find bigger jobs at the port authorities or manufacturing centers?

So he is doing his part to help the community. He offers a plate of ribs from his restaurant to anyone willing to part with their broken down, junked out cars.

He fixes up the car, gets it running, and then surprises someone in the community who needs the car in order to get to work and hold down a job.

They can’t walk 40, 50, 60 miles to great jobs — they have to settle for small-end jobs that pay well below what they need to survive.

With Eliot’s help, community members are able to drive to get the better jobs, thereby improving their lives and living conditions.

Giving someone a car can change all that, and it does change all that. I want to help everybody looking to better themselves when transportation is what’s holding them back.

The idea for this genius idea came to him back in 2019. At that time, he decided to hold a food drive at his restaurant that would hand out 250 boxes of food to people that needed it.

When the restaurant ran out of the food, there was still a line of people two-blocks long waiting in hopes of getting some food.

Eliot noticed that the majority of the people who showed up for food had WALKED — and in some cases, they had walked MILES to try to get the food.

I caught up with some of them and found out they had walked three or four miles to get there to receive food, but couldn’t make it in time because they had no cars and they had to walk. I was very distraught to see that.

It was at that point that Eliot had the charitable epiphany. He knew he could fix up cars, and he saw that people desperately needed cars. It just clicked.

We need to remember communities that have been forgotten. People recognize major cities and forget our rural towns, and the people in them that need some help. They’re people, they’re Americans, and we should be taking care of them.

So far, Eliot has collected over 100 cars that would have otherwise been junk. He has been able to gift 33 of those cars to people in the community.

And, Eliot doesn’t ask for a thing in return. He simply does what he does to improve the lives of people in his community.

He is a serious hero, and I wish I could be half the person he is!

Eliot has started a GoFundMe in order to offset some of the costs and to support his charitable endeavor.

Thank you, Eliot for being such an inspiration and such a help to those in need.