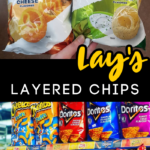 Lay’s chips understands the craving for something salty after devouring food that’s sweet.

You know the feeling after eating a slice of cake, you want a handful of potato chips with a crunch satisfying enough to eat the whole bag and Lay’s potatoes chips has done exactly that.

Introducing Lay’s Layers chips, flavored with one of their most popular chip flavors, sour cream and onion!

While each chip has more crunch than any of their chips on the market, the spherical snack bites have a center layer filled with even more flavor.

Meant to be eaten by the handful, you can find both Lay’s Layers chip bags at Walmart for less than five dollars!

When are they hitting all stores