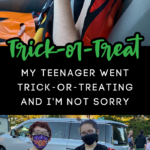 I remember being 14. I remember thinking that I was too old to dress up and take a Halloween bag door-to-door, collecting candy like one of the little kids.

I also remember being totally sad that my trick-or-treating days were behind me, and secretly wishing that I didn’t care so much what others might think of me, holding on to my childhood for one more year.

It was such a weird year. I wanted desperately to be seen as mature, cool, and older than I really was. But, I also desperately wanted to still do all the things that kids did.

Ugh. That was a tough year.

So, my daughter turned 14 this year. I just kinda kept quiet, and let her write her own story. I took a back seat, and watched her decide if it was still “cool” to do the trick-or-treating thing.

I could totally see her wrestling with the decision, but I kept quiet.

She hadn’t asked to go look at Halloween costumes this year, so I thought she had made up her mind.

But then, on the Saturday before Halloween, she asked if we could hit up Walmart to see what they had in the way of simple costumes.

I took her to the store, and I watched her internal struggle with wanting a full-blown costume, but thinking it might not be “cool.”

She finally decided on a pair of butterfly wings, but didn’t want anything else.

When we got home, she busted out some pipe cleaners that she found in her old craft drawer, and secured them to a headband, making a pair of antennae for the costume.

I still wasn’t sure that she was going to go through with trick-or-treating. She had mentioned how embarrassing it would be to run into people from school, and I was sure she was going to cancel on the Halloween festivities.

But, Halloween night came, and I drove her and my son around to different trunk-or-treats that were happening around town.

In years past, I would hold their hands as we went from car to car. They would dance around and laugh, totally hyped up on imagination and sugar.

This year, they still wanted me to walk around with them (Mom win!!) but wanted to stand at arms length and not be associated with me.

I was okay with that. I soaked up the fact that we were out together, holding on to childhood for one more year.

There might have been some people who gave us the side-eye, wanting to say something about “older” children trick-or-treating. But, I just looked at them, daring them to say something.

I will GLADLY let my 14 year old trick-or-treat. I will gladly stave off the teenage separation that happens between kids and parents.

She could be doing FAR WORSE THINGS.

So, let her have that candybar. Let her dress up as a butterfly. Let her imagination run wild for one more year.

This is time that we will never get back, and I don’t want to rush her to grow up sooner than she’s ready — sooner than I am ready.

I will not apologize for letting my 14 year old trick-or-treat for one more year.