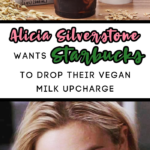 Alicia Silverstone is taking her vegan stance, and aiming her sights at Starbucks — again.

Back in 2019, Alicia went into a Starbucks with a reusable cup, and the barista at Starbucks used a paper cup to then fill her reusable cup.

She was furious, to say the least, and she immediately spoke out — via Twitter — about the company’s reusable cup policy.

I mean, it’s understandable that Alicia was not happy with how this act was adding to the carbon footprint of Starbucks, but there is a reason Starbucks does things this way.

I can tell you from experience, the reusable cups have markings to tell the barista how much milk to use, ice to put in the cup, ect.

That doesn’t make it right. It just means Starbucks may need to come up with new techniques for making their specialty drinks.

Well NOW, Silverstone is taking a stance against the surcharge that Starbucks charges for vegan milk.

Starbucks offers dairy milk alternatives in the form of almond milk, coconut milk, and they just added oat milk to the menu.

BUT, the company does charge a fee for using these milk alternatives.

Sure, the fee isn’t gigantic, but Alicia points out that it punishes people who are trying to live a vegan lifestyle.

These charges may seem small, but they penalize customers who are making humane and environmentally friendly choices.

Starbucks claims it must charge more for alternative milk, because it costs more than a standard gallon of milk.

A quick look on Walmart.com shows that a gallon of milk is $2.40 (of course, that is going to differ according to where you live), while 34 ounces of oat milk comes in at $3.

For those keeping track, the oatmilk is about a fourth of the size of the gallon of milk.

Alicia was quick to counter that Starbucks overcharges for a cup of black coffee, so the cost would really be a wash in the end.

With such a high-profit margin per cup of coffee, even after overhead, it is not an unreasonable request to stop charging for non-dairy milk

There is no word yet from Starbucks in answer to Alicia’s statement.

If you are looking for a tasty Starbucks beverage that contains one of these alternative milks, you have to try this Oatmeal Chocolate Chip Latte off the Starbucks Secret Menu.

I stand 100% behind Alicia on this...Not only vegan, but people who just can't tolerate regular milk, shouldn't have to pay a fee to use milk they can drink without stomach upset! Get rid of the vegan milk fees Starbucks...they have gone up from 40cents to 70 cents in the last 2 years...