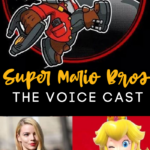 Nintendo just revealed the voice cast for their upcoming movie, and I must say, I’m pretty impressed.

In a world that’s completely full of live-action everything (I’m looking at you, Disney!), Nintendo is keeping it real by coming out with a feature-length animated movie, and I can’t freaking wait!

Every year, it is our Christmas tradition to go as a family and hit up the theaters on Christmas Eve. We pick a movie, and go all out with the popcorn and treats.

I can already tell you which movie we will be sitting through NEXT year! I can’t believe we have a whole year to wait. *Eeek!*

The much-anticipated Nintendo animated movie is supposed to come out December 21, 2022.

Now, I can already tell you that it is going to be awesome, but they just announced the cast, and OMG!! They couldn’t have picked better people to voice these characters!

Right off the bat, you know that Illumination Entertainment, which is known for such films as Despicable Me, Minions, and The Secret Life of Pets, has come to play hard, funny, and completely entertaining.

Here’s the list of voice actors for the Nintendo animated movie.

The fun starts with Mario, who is going to be voiced by Chris Pratt. I’m just going to go out on a limb and say that whoever cast Star-Lord, himself, as the titular character needs a raise!

You can’t have a Mario without a Luigi, and he will be voiced by Charlie Day of It’s Always Sunny in Philadelphia.

Princess Peach is going to be played by Annya Taylor-Joy, who you know from The Queen’s Gambit, which you can watch on Netflix.

Jack Black will be taking on the role of Bowser, so you KNOW this is going to be one hilarious antagonist!

Donkey Kong is going to be voiced by none other than Seth Rogan, who has been in about eleventy hundred different things … all of which are hilarious.

Toad, who watches over Princess Peach and the Mushroom Kingdom, will be voiced by Keegan Michael-Key, who you know from SO many things. Among his many acting gigs, he has been the voice of characters on shows like Bob’s Burgers, Rick and Morty, and movies like Toy Story 4.

Kevin Michael Richardson, who has been the voice on so many movies and tv shows, is going to play Kamek, the advisor to Bowser and mortal nemesis of Yoshi.

Cranky Kong, who is Donkey Kong’s grandfather, will be voiced by Fred Armisen, who was on SNL for like EVER.