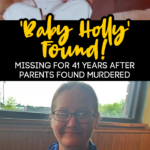 This is absolutely crazy and amazing!

41 years ago two bodies were found in the woods in Houston, Texas.

Those bodies were not identified until 2021, thanks to genetic testing, and they were identified as Harold Dean Clouse Jr and his wife Tina Gail Linn Clouse.

The couple was from Lewisville, Texas which is literally minutes from my home.

They had a daughter named Holly Marie Clouse and she was nowhere to be found, everyone referred to her as ‘Baby Holly’, and her extended family has been searching for her all of these years.

Holly is now 42 years old and has been found and I can not even imagine how her family feels and the confusion that Holly has had since she was so little when she went missing.

Holly’s parents quit communicating with their families in October 1980 and now the police are investigating a “nomadic religious cult”.

It’s believed that a religious cult may have played a part in the murders of this couple as well as the kidnapping of Holly.

Could you imagine how this must feel for Holly, who grew up having a normal life and had no clue that she had been kidnapped?

It seems that two women who identified themselves as members of that religious group dropped Holly off at a church in Arizona, according to First Assistant Attorney General Brent Webster.

They were wearing white robes and they were barefoot. They indicated the beliefs of their religion included the separation of male and female members, practicing vegetarian habits and not using or wearing leather goods.

The families of Tina and Harold received a phone call from someone that called themselves “Sister Susan” from Los Angeles in late 1980 or 1981.

This person told them that Tina and Harold had joined the religious group (AKA Cult) and did not want any contact with their families, she also offered to return their car to the family for a fee.

Things get a bit confusing for me here, because the family said they agreed to meet the person and that they had made arrangements for law enforcement to be there.

They said they met several people at the Daytona International Speedway race track, and that the police took those people into custody.

They also said the people wore robes but there is no police report that could be found that related to this incident.

If you have any information regarding these murders, we ask that you come forward. We wish Holly the best, we’re grateful that we found her, but we must continue with our purpose of finding who murdered this couple.

The people who ended up raising Holly are not suspects.

Holly has made contact with her lost family virtually and should be meeting in person soon.

It was so exciting to see Holly. I was so happy to meet her for the first time. It is such a blessing to be reassured that she is all right and has had a good life. The whole family slept well last night.

I can not even imagine the range of emotions they all must be experiencing after all of these years and how overwhelming this must be for Holly since she had no idea about any of this!