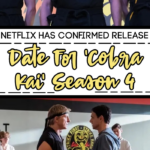 Cobra Kai fans can finally take a deep breath as Netflix has finally confirmed the release date for the upcoming fourth season.

So, hopefully you’ve been practicing your karate skills and of course, perfecting that Cobra Kai move.

With the fourth season of Cobra Kai on the way, showrunners Josh Heald, Jon Hurwitz, and Hayden Schlossberg have an idea of how Cobra Kai will end, but they don’t plan on ending the show in season four.

Although Netflix has yet to confirm a season 5 for Cobra Kai, fans can expect at least another season following season 4 if the shows keeps up with their popularity!

Which we all know it will…

Now at the end of Cobra Kai Season 3, Hawk quit Cobra Kai to help fight the good fight and Daniel and Johnny are finally teaming up against Kreese!!

It’ll be interesting to see where this season goes. Will Daniel and Jonny finally teach their skills to kids together? Will Miguel and Sam continue to rekindle their relationship? What is happening with Robby?

With that being said, an update on the upcoming fourth season for Cobra Kai has been revealed by Netflix Co-CEO and Chief Content Officer Ted Sarandos.

“What happened in the first part of this year was that a lot of the projects that we’d hoped to come out earlier did get pushed because of the post-production delays and Covid delays and we think we’ll get back to a much steadier state in the back half of the year, certainly in Q4 where we have the returning seasons of some of our most popular shows like The Witcher and You and Cobra Kai as well as some big tentpole movies that came to market a little slower than we’d hoped like Red Notice and Escape From Spiderhead,” Sarandos said.

Of course we all would prefer a specific date and month but for now, we can thank Netflix for at least narrowing down our options!

In case you missed it, fans can expect to see the fourth season for the hit show returning to Netflix in Q4 2021.

This means the show will make a comeback on the popular streaming app near the end of the year in either October, November or December just in time for the holiday season.

Ahhh I am so excited and can’t wait!!