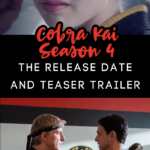 Bust out your favorite hachimaki and pull out your best karate gi, because it’s almost time to head back to Los Angeles, California to catch up with our favorite karate kids!

The wait is about to be over, because Season 4 of Cobra Kai is dropping on Netflix sooner rather than later.

Sure, it’s probably longer than some of you want to wait, but it’s WAY closer than us fans of The Handmaid’s Tale have to wait, AMIRITE??

You just have to make it through the holidays — which FLY by every year — and then, on the very last day of 2021, we get to usher out the old year in Karate Kid style.

That’s right, Cobra Kai is going to drop on December 31!

We might have to wait just a little while, but it will be SO worth it! If you remember, a powerhouse of epic dojo proportions had just formed when Miyagi-Do and Eagle Fang dojos merged.

Y’all. Am I the only one who could hardly breathe during Season 3? So stinking much happened!!

Daniel almost loses the dealership, so he goes to Japan. Surprise! He just happens to meet up with Kumiko and Chozen — both of whom we know from The Karate Kid Part II.

He also meets the woman who Mr. Miyagi saved from a typhoon many, many years ago. AND, in a surprise twist, she is now the VP of International sales at Doyona, the company that Daniel went to meet with in Japan.

She ends up saving Daniel’s dealership, just like Mr. Miyagi saved her all those years ago.

THEN, Johnny and Ali, from The OG Karate Kid, bump into each other on the Facebooks. This leads to them meeting in real life, which sparks an old itch between Johnny and Daniel.

BUT, Ali is able to squash the rivalry by telling them that they are more alike than they’d like to admit.

Daniel gets to apologize for the way things ended back in high school, and he and Ali finally get the closure they need.

Don’t get too comfortable, however, things got hella intense in Season 3.

So. Much. Stuff. went on with the kids in Cobra Kai, Miyagi-do, and Eagle Fang dojos. For me to explain it all would take a whole season’s worth of time. Just go watch it!

The important part is that Miyagi-do and Eagle Fang are joining forces against Kreese and his Cobra Kai karate kids in the All Valley Karate Tournament.

Kreese, who we get backstory on this season, makes the wager that if his dojo loses the tournament, he will take off, never to be seen or heard from again.

At the VERY end of the season, it looks like Kreese is about to make good on a “life debt” that one of his old friend’s, “Twig,” owes him.

So, here we are, all caught up and ready for season 4! Will you be watching on December 31?? We have to find out who is going to take the title at the All Valley Karate Tournament!! Gah!!

You can see the new teaser trailer for Cobra Kai Season 4 HERE.