Side note, I think this is actually the first time I’ve talked about any sort of bomb here at the blog… and given the name I find that interesting. 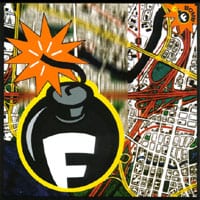 A week or so ago, we were sitting in the living room and Hal asked if she could go outside and play. I had to tell her no because it was raining outside. She then proceeded to walk out of the room muttering how she “hated the f’kin rain.” At first I thought my ears were playing tricks on me, because no way was my adorable child that wears a dress every day just because it makes her feel like a princess talking like that.

So, I asked her to repeat her self. She turned around–looked me right in the eye and said “I said I hate the f***in rain!”

My jaw dropped. Right to the floor. Her dad walked straight downstairs and stood in the hallway to see how I planned to handle the situation. Normally, when she says a word that’s inappropriate I just ignore it and hope it goes away, but this wasn’t just any old word. It was the F-bomb for crying out loud.

Well, being the completely inappropriate parent that I am, I turned right around walked out of the room and proceeded to laugh until I cried. This left the husband to be the heavy. He came out took Hal’s hand and explained to her that little girl’s don’t use a word like that and that it made him very sad. She promised never to do it again, and all was well.

Halle wanted to make her own oatmeal. So much so that she refused to believe me when I told her that cold water would not work, and that she had way too much and her oatmeal wouldn’t work. I turned around to finish steeping my tea and get her hot water out of the espresso machine, and she poured it all together anyway.

Well, when it didn’t make oatmeal, she got pissed. She begged me to fix it, and I dumped it out to start over. Instead of throwing a normal three year old temper tantrum–she took off to her tent and as she climbed in I heard, “Stupid f***in oatmeal” come out of my girl’s mouth!

So, I sent her to time out. Now, for the record Hal has probably been in time out four times in her whole life. She’s just that kind of kid. Usually I can tell her to stop doing something and she just does. She never gets in trouble, so this was a TRAGEDY.

I left her the requisite three and a half minutes, and then sat her down on the couch for a little heart to heart. She promised me she would never use the word again, but I know I’ve now made it entirely too cool for her NOT to use it again.

Maybe the real answer here would be to quit muttering it under my breath myself. Apparently they can hear everything.

Oy. I think my time will come, too. I just hope it's not in front of my parents, who do not cuss at ALL.

OMG!!! I so have to start watching myself too! Kids pick up on things like crazy. I can't say I blame you for laughing, I would likely do the same thing. Sounds like you guys did the right thing to get her to kick the habit!