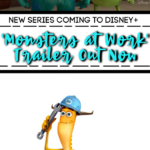 I remember when the first ‘Monsters Inc.’ movie was released, it was the first movie that I took my oldest daughter to see in a theater.

Can you believe that movie has been out for like 20 years?

Disney+ has a new series coming out called ‘Monsters at Work’ and it follows a character that is a new recruit to the monster crew.

Six months after the events of the original movie, the power plant at its center now harvesting the laughter of children to fuel the city of Monstropolis. Tylor Tuskmon, an eager and talented mechanic on the Monsters, Inc. Facilities Team who dreams of working on the Laugh Floor alongside Mike and Sulley.

The character, named Tylor Tuskmon, is voiced by Ben Feldman and works in the Monsters Inc. maintenance department.

The trailer for ‘Monsters at Work’ includes one of our favorite characters, Roz!

We also witness the return of Mike and Sulley, voiced by John Goodman and Billy Crystal, in the trailer.

Henry Winkler (Yes, the Fonz) is also in the new series voicing the character named Fritz which is Tylor Tuskmon’s boss.

If you have Disney+ you can watch ‘Monsters at Work’ when it premiers on July 7th, 2021.