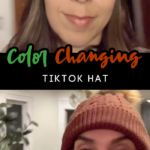 We have all seen those crazy color changing pictures — the ones that divide the nation over what color they actually are. Are they white and black, blue and gold, pink and white, or green and gray?!?

Then we had the argument over whether the man was saying “Yanni” or “Laurel.”

Now there is a TikTok VIDEO of a hat that seemingly changes color right before your eyes, and you have to see it to believe it.

Otelia Carmen bought this knit hat, which was a beautiful green in the store.

When she got home and took it out the bag, she thought she had somehow gotten the wrong hat. It was now brown!!

“So I bought this green hat at the store today, and I brought it home, and when I took it out, I was like, ‘Why is this brown?.’”

She then walks from one room to another room with the hat, and it changes color right before our eyes — brown to green, back to brown, and then to green.

“Then realized [what was happening]: metamerism. This is why lighting is so important in interior design.”

What is metamerism? Well, it is crazy, but it is actually a real thing!! Metamerism “is a phenomenon that occurs when two colors appear to match under one lighting condition, but not when the light changes.”

It really can mess with your brain. LOL!! It totally looks like a magic trick of some sort. But, it’s not!

Manufacturers have to deal with metamerism a lot. Take, for instance, vehicle production.

Even though the body paint is made from pigments different from those used on the bumpers and rear view mirrors, and the interior fabric is colored with dyes that are not anywhere near the fingerprints of the pigments used for the plastic dashboard, the assembled car has to match under virtually all types of illumination.

The same exact thing is what happened with Otelia Carmen’s hat. She had to get the thing out in full-on-sunlight to tell what that the true color was — BROWN!!