I thought I was prepared for everything. I read every book I could find. I stayed up late nights reading forums, I got all the pamphlets and books from La Leche League. I was ready to breastfeed. I was going to knock this whole booby milk party out of the park, my kid was going to get the best she possibly could. 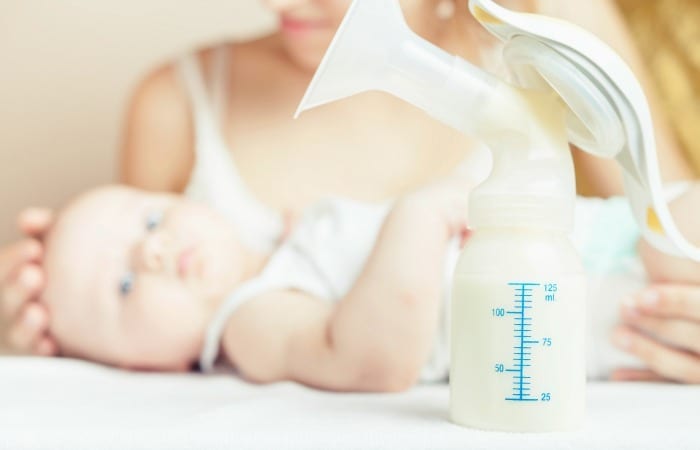 And then I had her three days shy of 37 weeks. 37 weeks is a full term pregnancy, she was perfectly healthy and happy in every way, and all was good. Except when it came time to eat. I pulled out my ginormous hot pulsating boobies (by the way, nobody told me about the pulsating part– was that just me?) in front of god and everyone, we stuck her on there, waiting for the big to-do, and she did nothing.

In came lactation specialists, nursing helpers. We emptied the room, they brought in more lactation consultants. We tried turning off the lights, turning on all the lights, teasing her to open up, not teasing her, singing, music. WE TRIED EVERYTHING. In the meantime, my boobs were filling up fuller and fuller, and she wasn’t eating. In fact, she was turning orange. I thought I was prepared, but I didn’t have the answer to that– all I knew was that the doctors, the nurses, everyone were worried about jaundice. And she was so little, and they wanted to give her formula. But, I wanted to give her breastmilk. 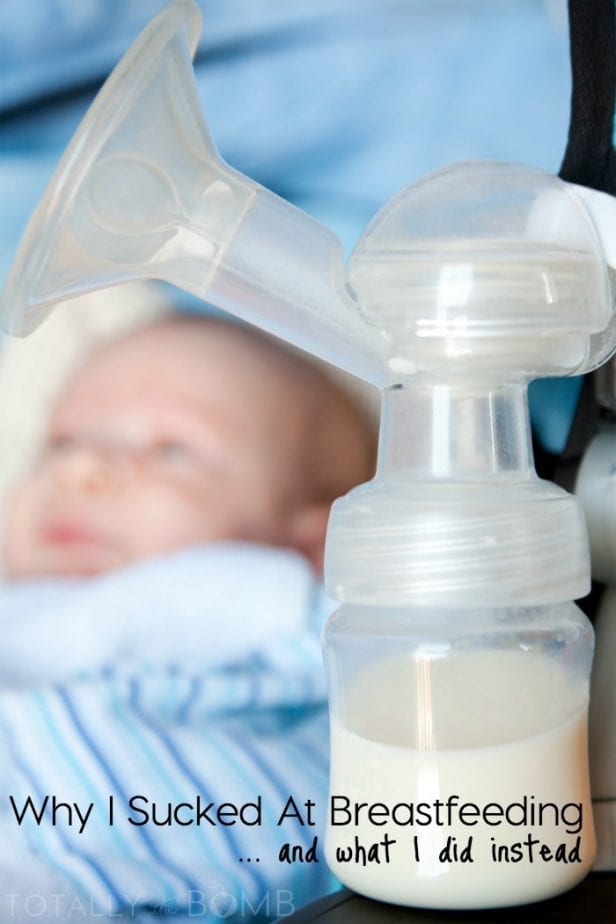 So, I pumped. I pumped out the gooey stuff first, and we sort of let her suckle that off my hands. And it worked! Then I pumped some milk. And we put it into a bottle and she drank. She drank like it was nobody’s business. My baby wasn’t hungry, my stomach un-knotted, and I felt like I was taking care of my kid.

“My gut says to feed my baby.”

And so I did. I pumped the milk I made into a bottle, and she drank. And then I did it again, and again. 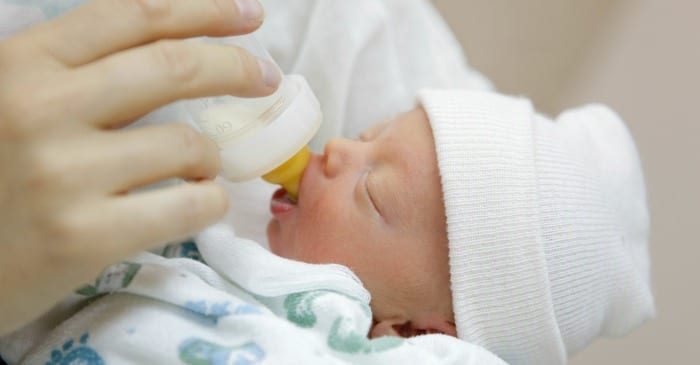 And then I became one of those moms that NOBODY TALKS ABOUT. The moms who pump and feed. The moms who spend twice as long as the rest of the world feeding their baby. You want to know why nobody talks about these moms? Because these moms are too busy pumping to be on the internet talking about they are doing. They are literally either feeding or pumping ALL THE TIME. I would hook up the breast pump to both of my boobies, and I would pull my laptop in front of me (no iPhones yet, I am so jealous of moms that have iPhones now) and I would play games, or I would read baby forums, or I would just watch videos, I’d even hold my baby. We’d coo and talk. It didn’t matter what I did, it just mattered that I was getting that milk.

When I’d pumped enough, I’d pop a lid on the bottle, and she’d drink up. We did this for a long time.

I got to where I could pump twice as much as she needed, but that took twice as long, and I’d freeze half and give her half. And then one day my boobs just didn’t make milk anymore.

And I was devastated. Here I’d hatched the perfect (and totally irrational) plan to make it through the first year on my milk alone, and my milk was gone. I had enough saved up to get her through another month or two, but the reality is that we only made it about the first six months on breastmilk and then we switched to formula exclusively after that.

Wow, formula was so expensive. She couldn’t take the powder stuff, only liquid, and when we did the math we realized it was costing more than my car payment.

But she took it, and she was a happy, healthy kid. I still felt guilty, heck, I STILL feel guilty for not making it that entire year, but the reality is that was a crazy crazy plan that was so unbelievably time consuming that I was actually missing out on spending time with my kid.

And so, there is a little part of me that is glad the milk stopped coming. Because when it did, when I finally wasn’t breast feeding and bottle feeding and I was able to be with my kid, and it was awesome.

This story made my night by chippinh away a little bit more at the feeling still deep inside thar I failed at feeding my daughter from day one. She didn't have a good latch, and I felt like a failure because I had to pump and bottle feed her. Then two months in, my supply dropped to less than half of what it was the day before and I was so upset my husband had to call the lactation specialist for me and ask for advice. Nothing worked, and I felt even worse when I realized I would have to supplement with formula (because of all the "formula is poison" messages I read). But by the time my girl was just over four months, I was fine with the fact that my supply was frying up and she would be exclusively formula fed. I was tired of staying up later than necessary and washing dozens of extra things and making sure the cat didn't chew on any of the parts. Yes, it now costs almost $40 a week to feed her, but she's happy and healthy, and I can get a little more sleep.

I overproduce which meant my babies stomachs were always upset because they were never getting to the hind milk and were filling up with lactate. I'm expecting my third in a few months and am mulling over what to do. Without knowing why pumping solved the problem until my second baby I pumped exclusively for 6 and 3 months respectfully after nursing for the first three months. It was exhausting and I resented the whole thing by the time I stopped with each. I have a decision to make with this last baby and when I hear "breast is best" without any consideration as to the individual situation I want to reply that, actually, "mother is best" because a woman who is broken and exhausted can not care for her family or herself properly and THAT is what is most important. I'll give the pumping a shot again but I won't let it break me before I turn to formula...for the sake of everyone. I admire those that, faced with adversity when nursing, make the decision to pump. It is taking on a laborious task for the sake of their little ones but if you don't it doesn't mean that you don't care just as much.

Wow I can relate to this soooo much. I was in the exact same boat with both my girls. And both ended up having jaundice. I pumped n pumped I hardly slept. U make it to 6 months how did you manage that I only made it to 3. I was obsessed with pumping I pumped till I bleed it was insane. Best thing I did was putting baby on the formula. You so right on missing out on the baby and to focused on the way we are "supposed" to be feeding.

Hi Jamie... my name is Jamie as well. I just wanna say I like you :) just yesterday I read an article about what to tell your daughter before entering the 5th grade and I loved it so much, so shared it on facebook. To let other folks now but mainly so I can reference it so I could prepare my daughter for when she starts 5th grade next year. And now here today I'm reading yet another great article that was so similar to my story about breastfeeding, and then seeing your picture, again, at the end of the article I just had to comment :) I'm currently pregnant with my 4th child and I'm totally excited to try to breastfeed again.. but if I have to pump it again I certainly will. Yes it was time consuming but I also got to where it almost felt easier.. even though I would watch so many mothers, who so gracefully breastfed their baby, and I would be so jealous. I have large boobs and there was nothing graceful about.. nor was there any way to conceal what was going on.. not for me anyway. So pumping just started to feel natural. And as long as my babes got my milk I was happy. Anyways great read..thank you!! I'll definitely be a subscriber.. I always said "Jamie's are pretty cool" lol :)

I'm so glad I had children before the internet, "mommie groups", and so much advice. I had my first child in 1978 and only knew one other mother my age that breastfed so we muddled through on our own. By six months she wanted food rather than a liquid diet and would only nurse first thing in the morning and last thing before bed. By seven months she was totally done with me. Other than a feeling of being rejected by her, I realized that the enjoyment of nursing at that point was for me rather than her. Thank God I didn't have the pressure of "should do it this way" or "shame on you" like today's mother's are faced with. I took my cues from her and guess what. She was and still is incredibly healthy, intelligent, and compassionate in spite of only being nursed for six months. Truth is, if I had followed my friends' lead and fed her formula I suspect the outcome would have been the same. Their children turned out just as awesome. I do think breast is best for the immunity, but mothers need to listen to their instincts and take cues from their babies, too. My second daughter was nothing like the first and nursed for 18 months. Mothers, do what feels good for you and your baby and never feel shame because "this is what the others say I should do". I promise they will be fine whatever you decide.