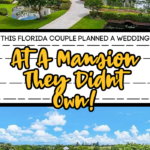 This is a pretty crazy story, like where do you even get the audacity to do such a thing?

Courtney Wilson and Shenita Jones totally did just that!

They planned an entire wedding and even invited friends and family to the wedding.

A wedding that was planned at a home they did not own, nor did they have permission to use.

It included a bowling alley, tennis courts, a gazebo, a swimming pool with a waterfall, hot tub, and an 800-foot bar.

Sounds like an amazing place for a wedding right? Well Courtney Wilson said it was God’s plan for them to marry there.

Courtney Wilson had posed as an interested potential buyer of the property.

This was how they toured the estate several months ago, according to Keith Poliakoff, who is the attorney for Southwest Ranches.

Nathan Finkel, is the owner of the home, and a few months later, Courtney asked Nathan if they could use his backyard for his wedding.

Nathan of course said no, I mean, he doesn’t know these people.

But that didn’t stop them. Courtney and Shenita sent out invitations! They invited people to a wedding at the property anyhow. What in the world??

Yes, They pretended they bought the mansion!

The invitations detailed the event as a Saturday afternoon ceremony that would be followed by a red carpet cocktail hour and a reception lasting past midnight.

It even carried overnight to a Sunday brunch that would be from noon to 4. How on earth did they think they would get away with this?

Nathan was shocked when Courtney showed up Saturday morning to start setting up for the wedding.

He immediately called 911, according to the South Florida SunSentinel.

I have people trespassing on my property. And they keep harassing me, calling me. They say they’re having a wedding here and it’s God’s message. I don’t know what’s going on. All I want is (for) it to stop. And they’re sitting at my property right at the front gate right now.

Two police officers showed up and told Wilson he would have to leave. He did end up leaving and no charges were filed.

The South Florida SunSentinel tried to questions Courtney Wilson about it and he said “I don’t want to talk about it,”.

So bold, but why? I really just don’t understand how he thought they could pull this off.

Oh and by the way, the home is still for sale if you’re interested!